Over the course of Friday, Bitcoin returned above $ 60,000 , which had been missing since mid-April, and over the weekend it touched $ 63,000, close to around 64,800 that still represent the record today. At the time of writing, BTC has slightly retraced but remains above that critical value, signaling a positive trend that for many is to be found  in the approval of the first Bitcoin futures ETF in the United States , rumored for a few days and then actually happened. today.

The Securities and Exchange Commission (or SEC), the regulatory body for financial matters in the US, has decided to accept the proposal of ProShares and its ProShares Bitcoin Strategy ETF: an  instrument based on futures derivatives that enable investors to ” to bet “on the future price of Bitcoin, rather than directly buying and holding the cryptocurrency . A system evidently considered safer, even if there are already several companies that have Bitcoin at the center of their offer, the Grayscale trust above all, or in the belly, such as Tesla and ARK, and which turn up their noses at the perplexities expressed at the headquarters. approval of an ETF that holds it directly through spot positions. A bit like it already happens in several other countries. 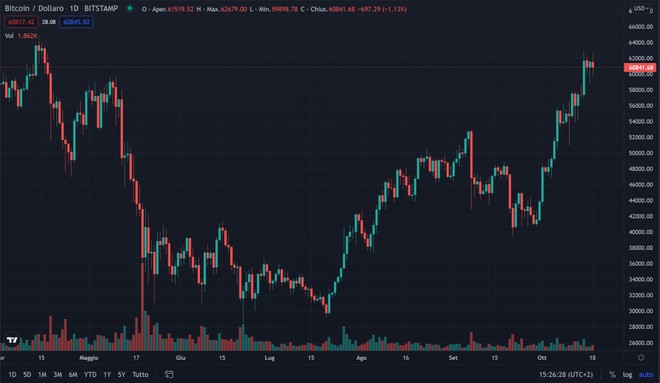 The first ETF linked to Bitcoin in the United States is however positive news for the world of cryptocurrencies : exchange-traded funds have become a huge market thanks to the flexibility they offer, just think of those that collect entire indices or investment sectors. and the spread of apps, of banks but not only, which have included them in their offer for years. What happened today opens up a much larger market for Bitcoin and perhaps even a normalization, to tend, in the trading price.

So far the SEC has been reluctant to approve ETFs that place Bitcoin at the center of their offering, citing  doubts about the liquidity and transparency of movements , as well as the alleged risk of scams, but this opening on ETFs that focus on futures could hint at one. opening for further developments in the future. Among other things, the world of ETFs is no stranger to risky products, with numerous operators offering, for example, leveraged products with high potential volatility on the US market.

What is an ETF:
The  exchange-traded fund  (known by the initials  ETFs ) are a type of investment funds publicly traded, limited liability for members who participate in the trading of shares and the key distinction of being passively managed because you link to a pre-existing or similar equity / stock index (for example, the S&P 500 index which groups the 500 largest US companies).
They are part of the family of exchange-traded products (ETPs), which include ETFs (exchange-traded funds), ETCs (exchange-traded commodities) and ETNs (exchange-traded notes), all three listed on the stock exchange. and funded through actions.

Disclaimer:
In no case can the information and data provided through this site be interpreted as an offer, recommendation, invitation to offer, promotional message aimed at the purchase, sale or subscription of financial products or services or solicitation for investment. Therefore, any investment decision that is made in relation to the use of data or information on the site is the sole responsibility of the investor.